I’ve seen elephants in zoos of course, restricted, moving around in circles, stared at by the thousands of noisy visitors - such a desperate form of existence. In the 22,270 km² Etosha National Park in NW Namibia however, I was for the first time able to see these truly magnificent creatures in their natural habitat. Watching David Attenborough programs on TV is always a delight, but nothing prepares you for the sheer awe of seeing these animals in real life in their own world.
.
From the heavily corrugated dust track we were on, the first thing I saw was what looked like a huge rounded granite boulder over the top of a hillock, but as we drove to the crest of the mound we realised it was in fact the head of a huge African elephant standing at a waterhole! This was real and I’ve never felt so small or humbled by natural wildlife. There are strict instructions never to leave your vehicle whilst in the park, so I had to accept that looking out of the window of our 4x4 was the best I was going to get.
.
All around us herds of Zebra were also drinking, running & frolicking with each other. Springbok daintily skipped past & Oryx & Giraffes were all there too. Hundreds of birds flitted about and falcons and other birds of prey circled overhead. It was a visual tapestry of wildlife with so many species all measuring each other up and acknowledging the hierarchies at the hole. What struck me most was the grace of motion of the elephants. Every movement of foot or trunk was slow, fluid & purposeful. At times they were just like living statues, almost motionless, just studying the world about them & at other times when walking, able to cover big distances so quickly but so gently. I was aware that they were aware of us, large eyeballs measuring us up but not seeming irritated or intimidated.
.
It was hard (especially looking from the car window) to take in the reality of it all rather than still imagining it was a TV program. I also felt deeply sad that it’s only a mat 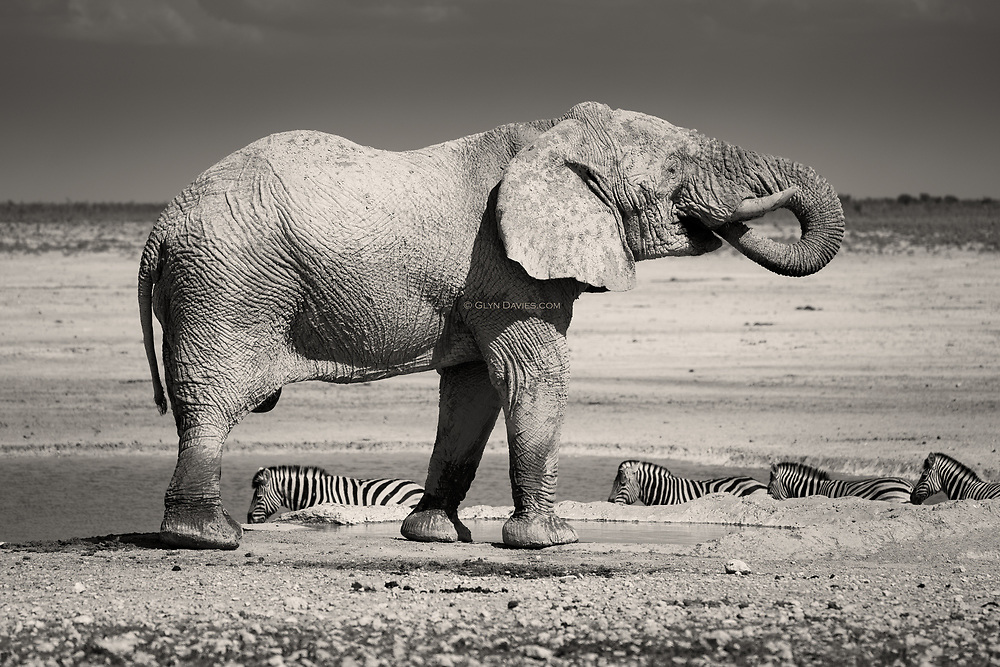